The U.S. International Trade Commission (USITC) recently released its long-awaited report to Congress on the projected economic impact of the U.S.-Mexico-Canada Agreement (USMCA), clearing one hurdle for Congressional approval. A key feature of this report is its observation that the USMCA will have a positive impact on the U.S. economy and employment, including raising GDP and increasing U.S. employment:

Once enacted, the USMCA will be the first U.S. free trade agreement to include a chapter on digital trade. The original NAFTA, which USTR notes in a recent fact sheet was negotiated “before the age of even dial-up internet”, did not really contemplate digital trade. While the Trans-Pacific Partnership (TPP) contains an Electronic Commerce chapter, the U.S. withdrew from that potential partnership back in 2017.

Notably, the USITC report concludes that the agreement will likely have a “significant, positive impact” on industries that rely on digital trade.

This sentiment is echoed by a number of stakeholders. Christine McDaniel, Senior Research Fellow at the Mercatus Center believes that the digital trade chapter reflects “some of the best practices in international trade.” Anupam Chander, a Professor at Georgetown Law, says that “USMCA’s digital trade chapter represents the strongest set of digital trade provisions yet negotiated, at least outside the single market created in the European Union.” The USMCA has also been supported by several trade associations representing the tech industry, which jointly filed a letter on April 28, 2019, urging Congress to adopt the USMCA as soon as possible.

McDaniel elaborates on some of these best practices from the digital trade chapter:

“USMCA’s digital trade chapter prohibits countries from applying discriminatory measures to digital products that are distributed electronically. The chapter also protects trade secrets and bars countries from requiring the disclosure of source code (the secret sauce for how a business operates on the internet and in the ethernet), and even protects algorithms expressed in that source code (the key ingredients to the secret sauce)…[it] also bars our trading partners from requiring foreign firms to physically store or localize data in their host country, even for financial services companies. This is important because data localization requirements would mean that any U.S. company working abroad would have to build out or lease separate data infrastructures in each country where they do business. It makes exporting an artificially costly endeavor, especially for small and medium-sized firms.”

A summary of some of the new provisions concerning digital trade in Chapter 19 of the USMCA that were lacking in NAFTA can be found in the USITC report at p. 174: 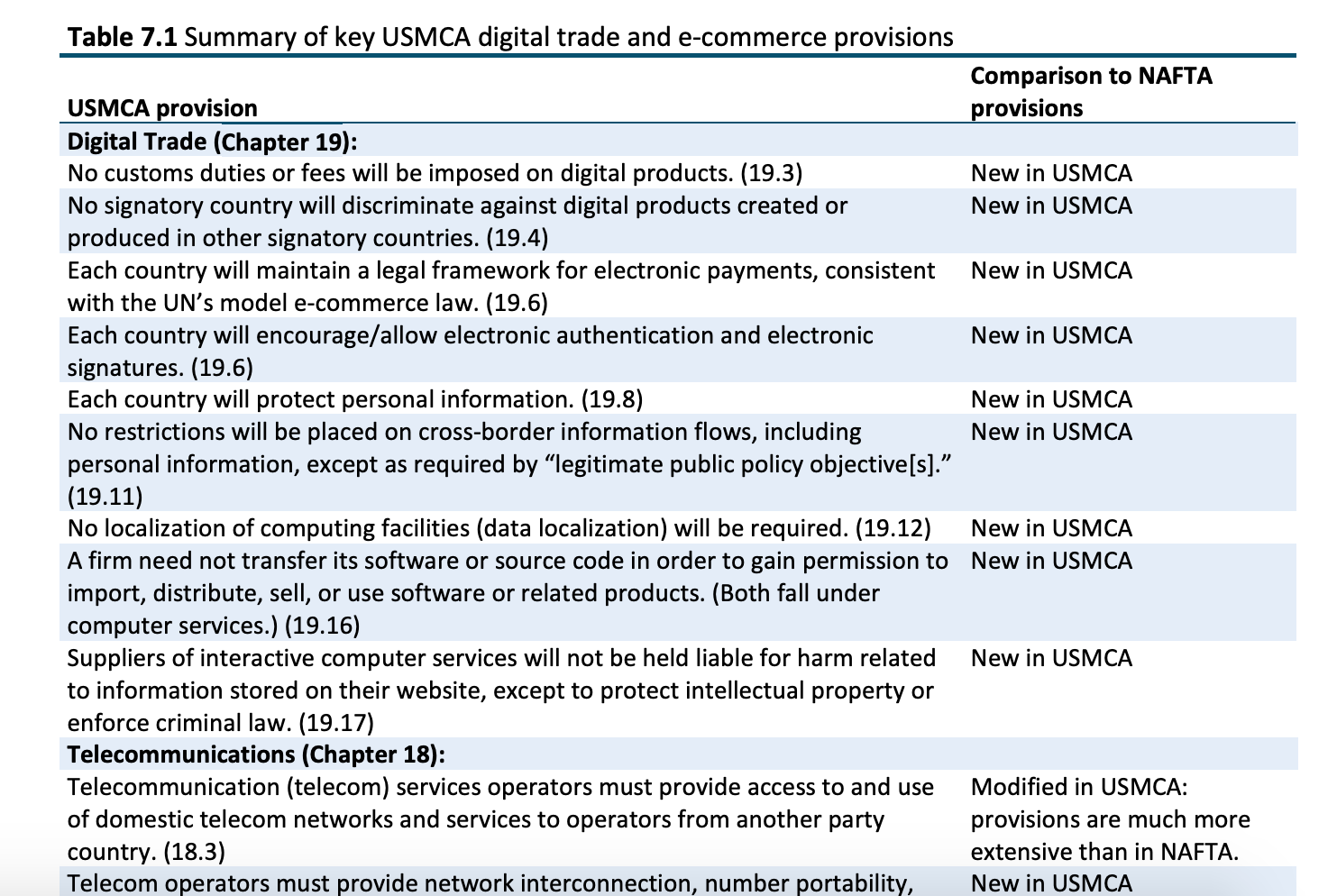 In addition, the USITC report found that provisions on digital trade were particularly important in an economy that has many different sectors becoming increasingly digital because it reduces policy uncertainty (at p. 14 and p. 175, respectively):

“The elements of the agreement that would have the most significant effects on the U.S. economy are provisions that reduce policy uncertainty about digital trade…

Maintaining free international data transfers is important for firms in all parts of the economy because industries increasingly rely on data to efficiently produce and supply their products and services… [D]ata transfer regulations impact more than just the computer services industry. The agriculture and food industry have digitized extensively in recent years, particularly because of increased digital monitoring of agricultural activities and information transmission throughout global supply chains.”

As shown in the USITC Report, the inclusion of a digital trade chapter in the USMCA will positively impact the U.S. economy, and has been welcomed by academics and the tech industry.