A Wired story yesterday pointed to another incident at the congested intersection between IP and 3D printing.  The object at issue was a mobile phone dock in the image of the ‘Iron Throne,’ the probably-not-OSHA-compliant seat of power around which HBO’s fantasy epic, “Game of Thrones”, revolves.  A 3D modeler seeking “extra geek factor” had designed, and subsequently offered for sale, an iPhone dock replica of the throne in question.  Then the cease-and-desist letter from HBO arrived. 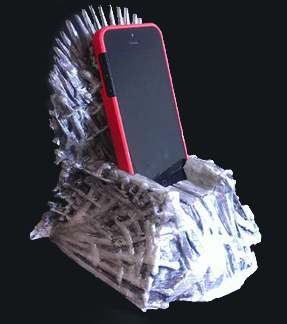 This isn’t the first case of avid, entrepreneurial, and CAD-savvy fans running afoul of IP law: in late 2011, a designer’s 3D replica of a metallic cube featured in the movie Super 8 led to a similar cease & desist from Paramount Studios, who had already licensed the right to produce replicas to another manufacturer.

(Television paraphernalia already made IP news earlier this month: Hollywood Reporter reports on Towle v. Warner Bros., in which a federal district court ruled last week that a custom auto shop making Batmobile replicas infringed the “character” of that vehicle, although the manufacturing technique in this case appears to have been more traditional.)

Previous DisCo posts on 3D printing [1] [2] [3] have noted the game-changing economic consequences of consumer-ready additive manufacturing technology: just as the Internet permits everyone to publish, 3D printing permits everyone to manufacture.  In the context of intellectual property, this underscores the new reality that when most consumer possess the capacity to violate IP rights, the system needs two things to function effectively: (1) perceived legitimacy, i.e., credibility; and (2) legal alternatives to infringement.

First, like any regulation, enforcement of IP law is expensive.  The system therefore depends upon voluntary compliance to sustain itself.  But many consumers will flaunt the rules – often with impunity – if, in their perception, the system lacks legitimacy.  This is why outrage over issues like smartphone unlocking is important: it communicates to the public (not just smartphone owners) that regulatory action on intellectual property in Washington can affect what they can or cannot do with their own property that they have purchased.  That is not a legitimacy-enhancing message to transmit.

Secondly, even if the system possesses credibility, that perceived legitimacy erodes when consumers cannot legally purchase the product through an authorized channel.  This means that a satisfactory answer to the question: ‘where can a geek buy a phone throne?’ is more important than one might initially suspect.

Content moderation practices: Where will the DSA draw the line?

EU Network Usage Fees: Is Anyone in Favour of Taxing Internet Traffic, Big Telcos Aside?